GameBike is a modification to a stationary exercise bike that turns it into a Playstation4 controller. The device was a fantastic way to workout because it combined the thrill of racing car games with an otherwise boring exercise activity. You quite literally forget you were working out until you finished a race and realised you were covered in sweat. Four iterations of the bike were made between 2013 and 2018.

The prototype proved the idea, it was great fun and everyone that tried it loved using it, including myself. It was really rough though and the front wheel caused damage to the carpet after heavy use. Also, the steering on a gamepad isn't interpreted as steering angle - it's interpreted as steering effort. While this may seem like a small difference, it is noticible when gaming. A year later I purchased a cycle trainer in order to build a more permanent and convenient version. 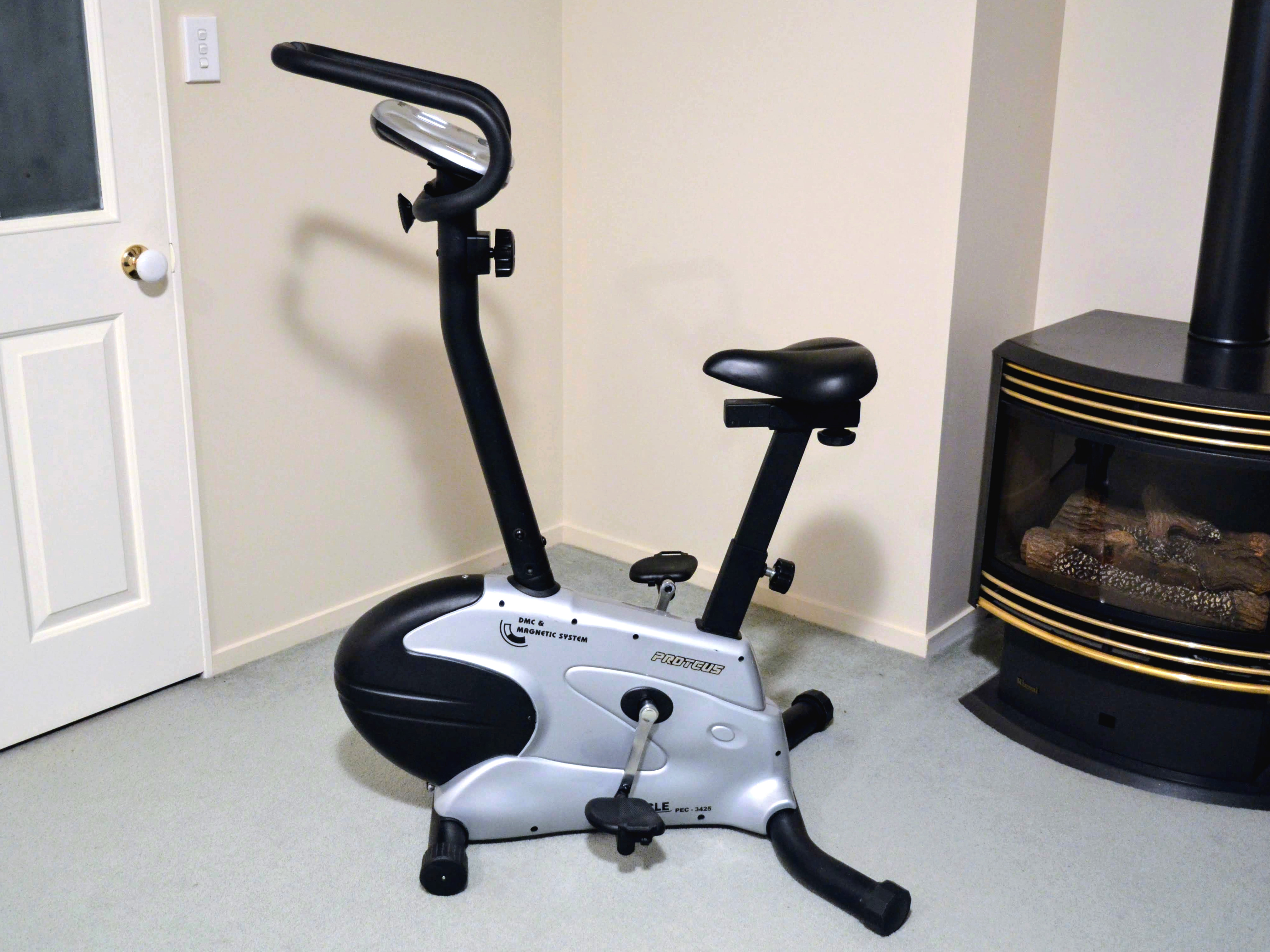 After stripping the exercise bike, fitting handle-bars, brakes, and sensors, it was much more convenient to use. But it still had a very prototype appearance due to the fact that the housings for the sensors was made from wood. The pieces of wool were routed using a router and a dremel. An encoder wheel was attached to the crank with slots cut for the infra-red beam-break sensor. This version worked on the PC as a Logitech G25 racing wheel, so the input was now steering angle. This felt much better. 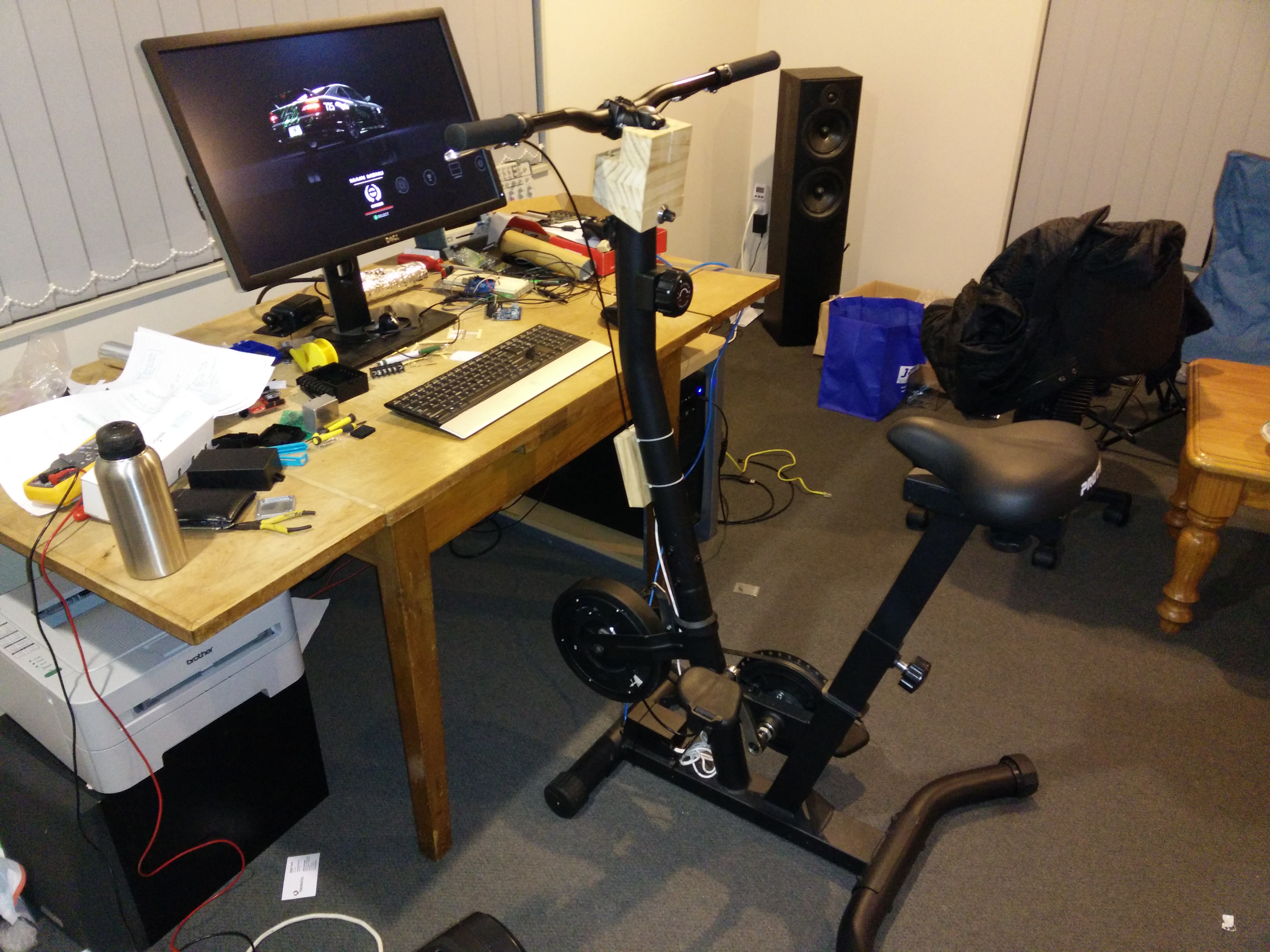 I purchased a 3D printer so I could make a single housing at the base of the handle-bars that would hold the brake sensors, proper bearings for the steering shaft, and the electronics. This version could connect to a Playstation 4 and appeared as a Logitech G29 racing wheel. This version included a mount for a PS4 controller so you could easily navigate through menus while sitting on the bike. It used GIMX emulator to trick the Playstation 4 into thinking the device was a Logitech racing wheel. It also included thumb buttons so you could change gears while driving vehicles with manual transmissions. Controller authentication was handled by forwarding authentication requests to the official Dualshock controller, but the device still appeared as a racing wheel to the Playstation4.

A friend of mine, who is a personal trainer, tested the bike out with some of his clients. The feedback was really positive, apart from complaints that the mechanism was a bit flimsy. Also, there were a few connectivity issues and the bike had to be plugged into the PS4 via USB and required power from the wall to run the electronics on the bike. Unfortunately I didn't take any decent photos of the finished product, but my friend took a couple. 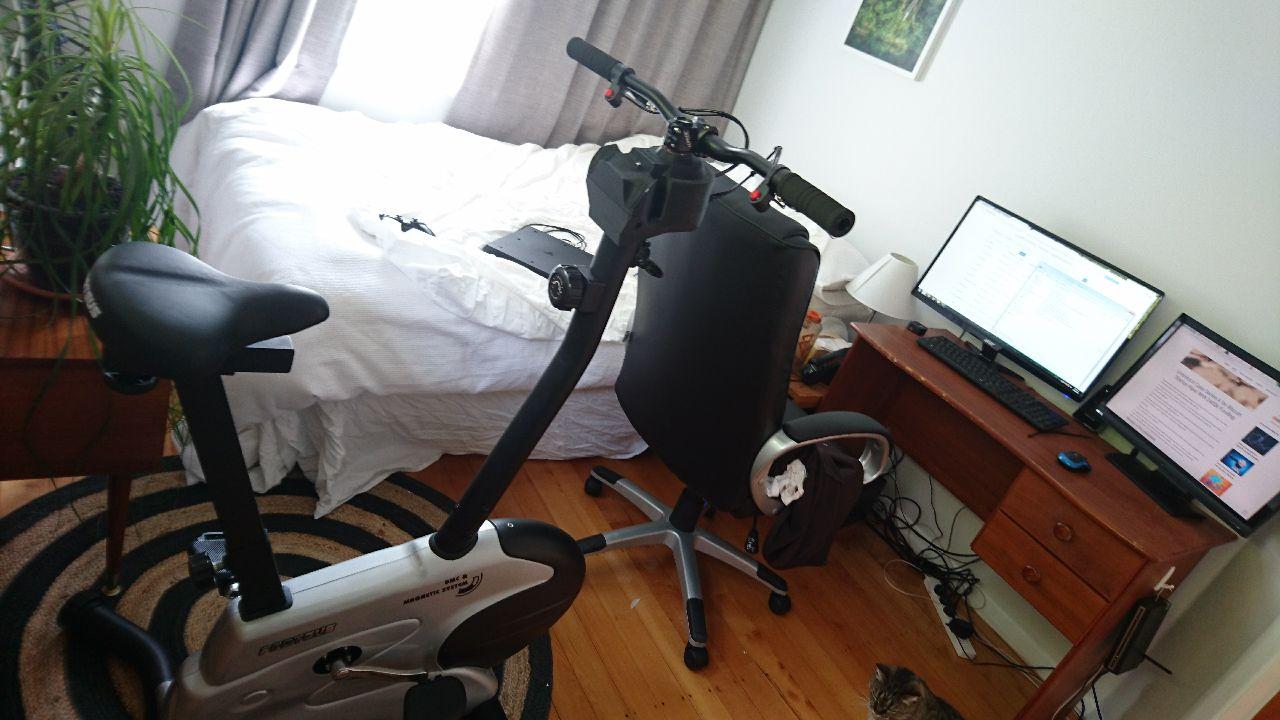 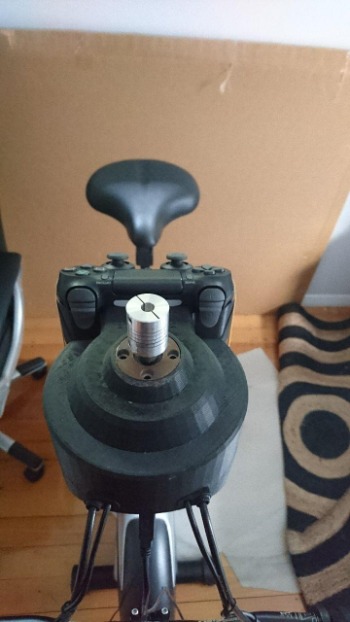 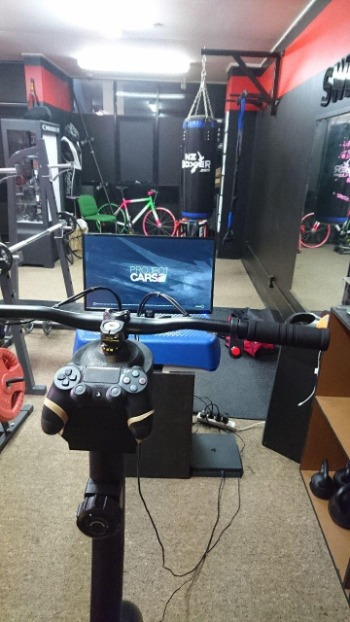 The fourth iteration saw the head made from metal. It was constructed from a combination of laser cut and folder aluminium and stainless steel. This version included:

By this time I had purchased a OMIO CNC X8-2200EPL which I used to mill the holes in the aluminum housing. The laser-cut and folded components were designed in Solidworks and manufactured using a local cutting and folding shop (Stainless Design Limited). The base-plate is made from 8mm stainless steel.

Although not shown in the photo, the electronics were also housed inside the case. This version was much more sturdy and reliable than the previous prototypes. Although it didn't look very attractive, it worked really well. However, after getting it all going, I decided to move to Japan. As part of that, I sold all my posessions including my workshop and the bike. Hopefully someone out there makes a better one and sells them commercially. It's definitely something I'd buy. 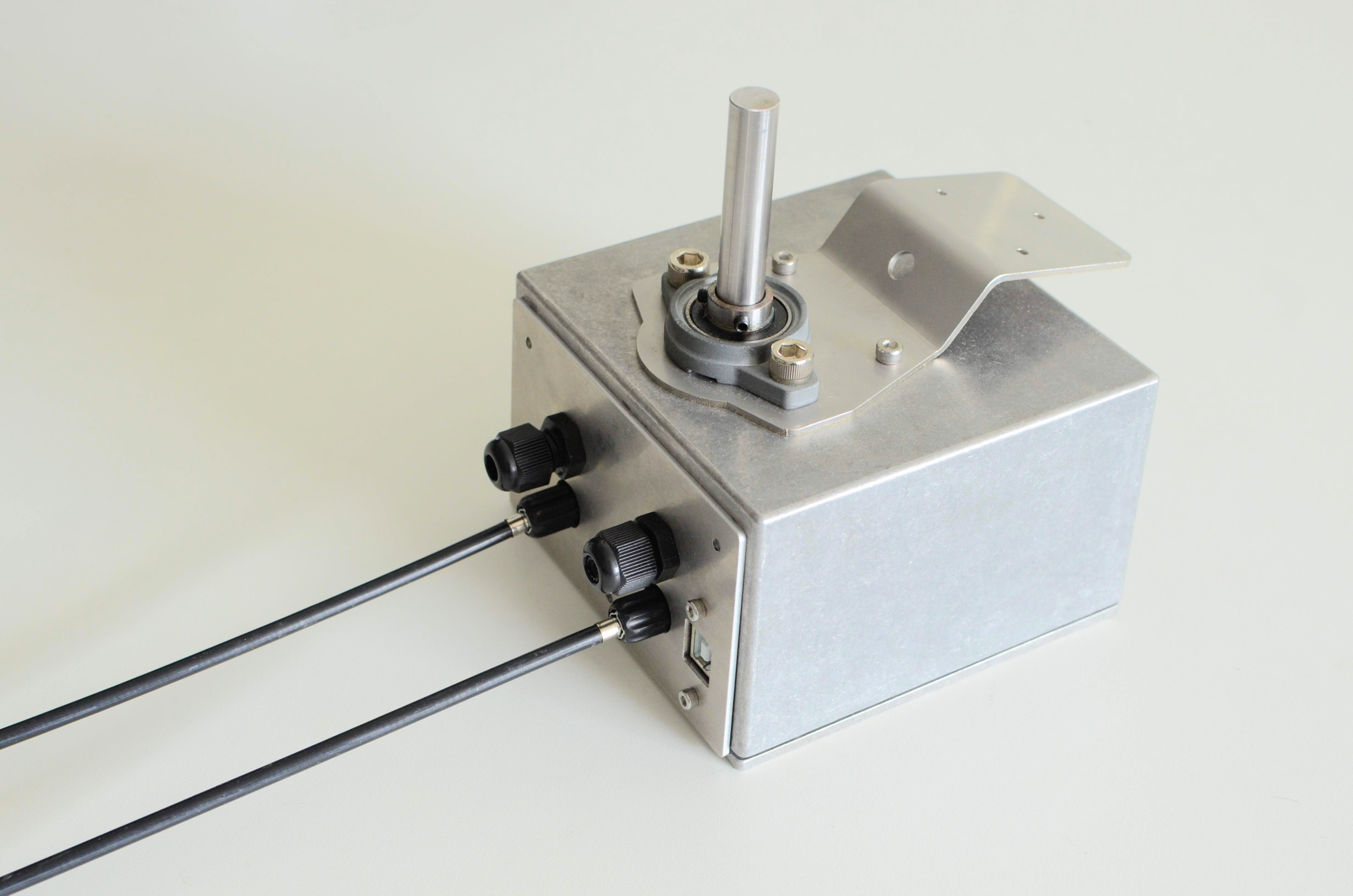 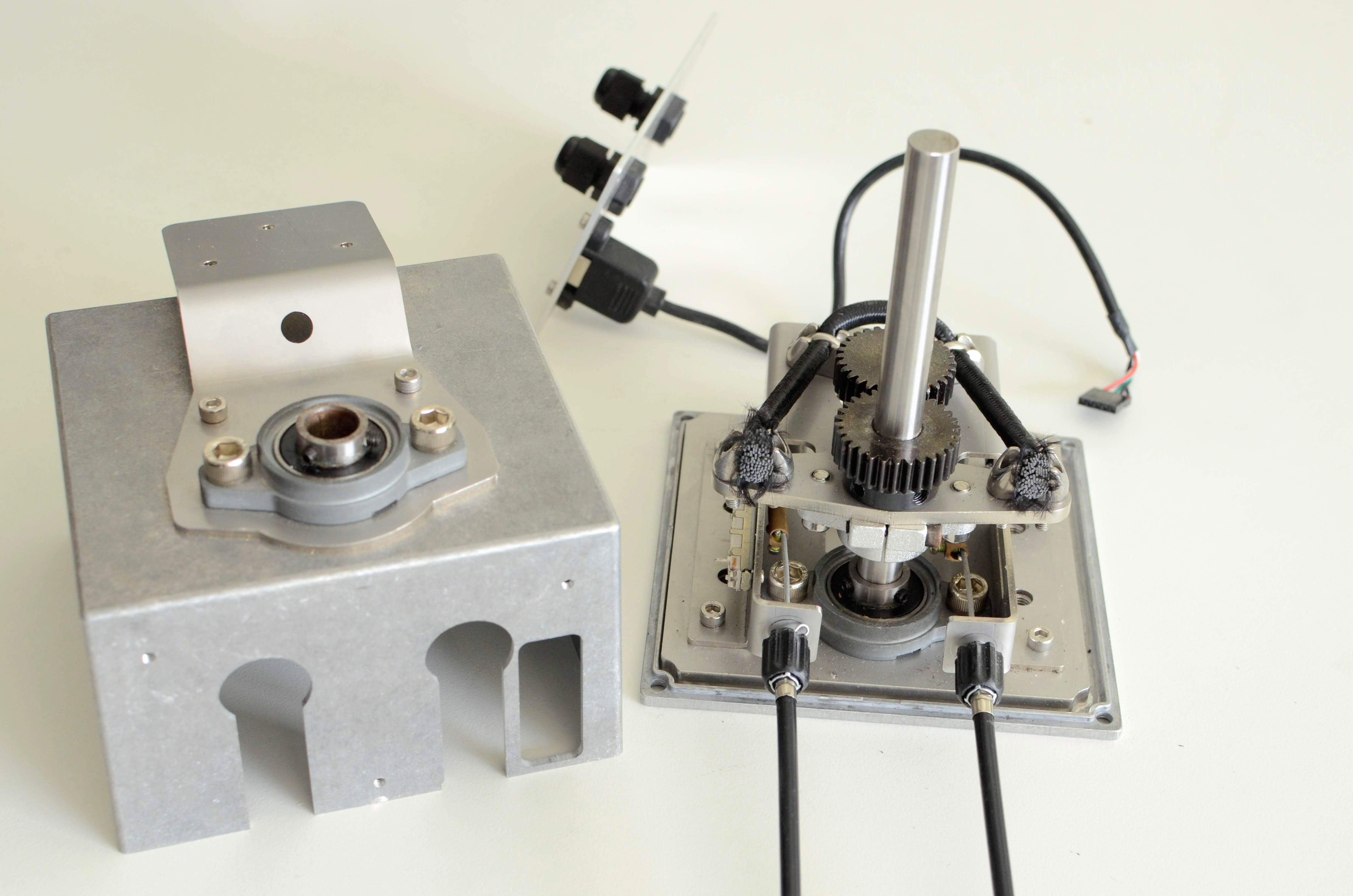 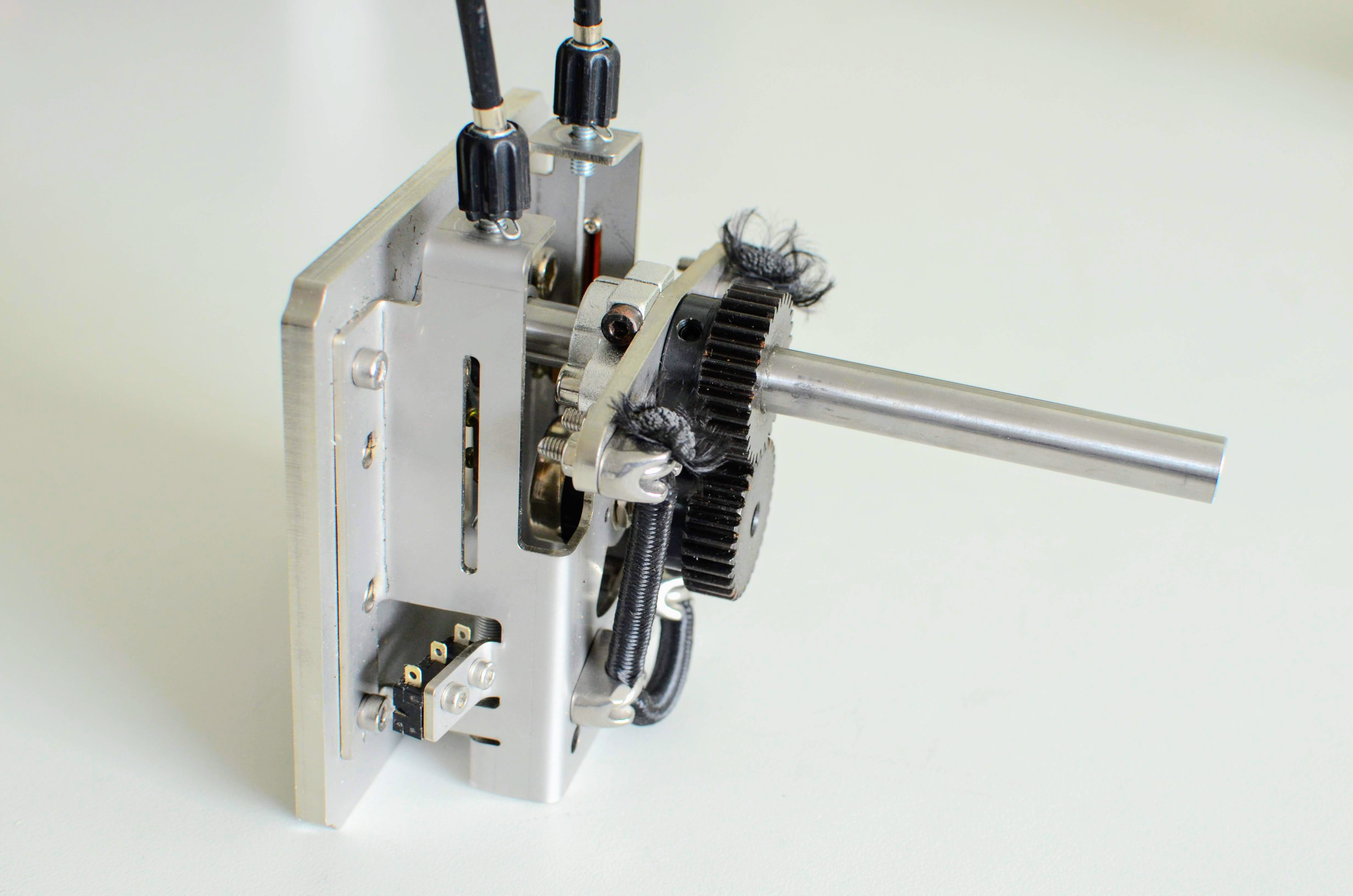 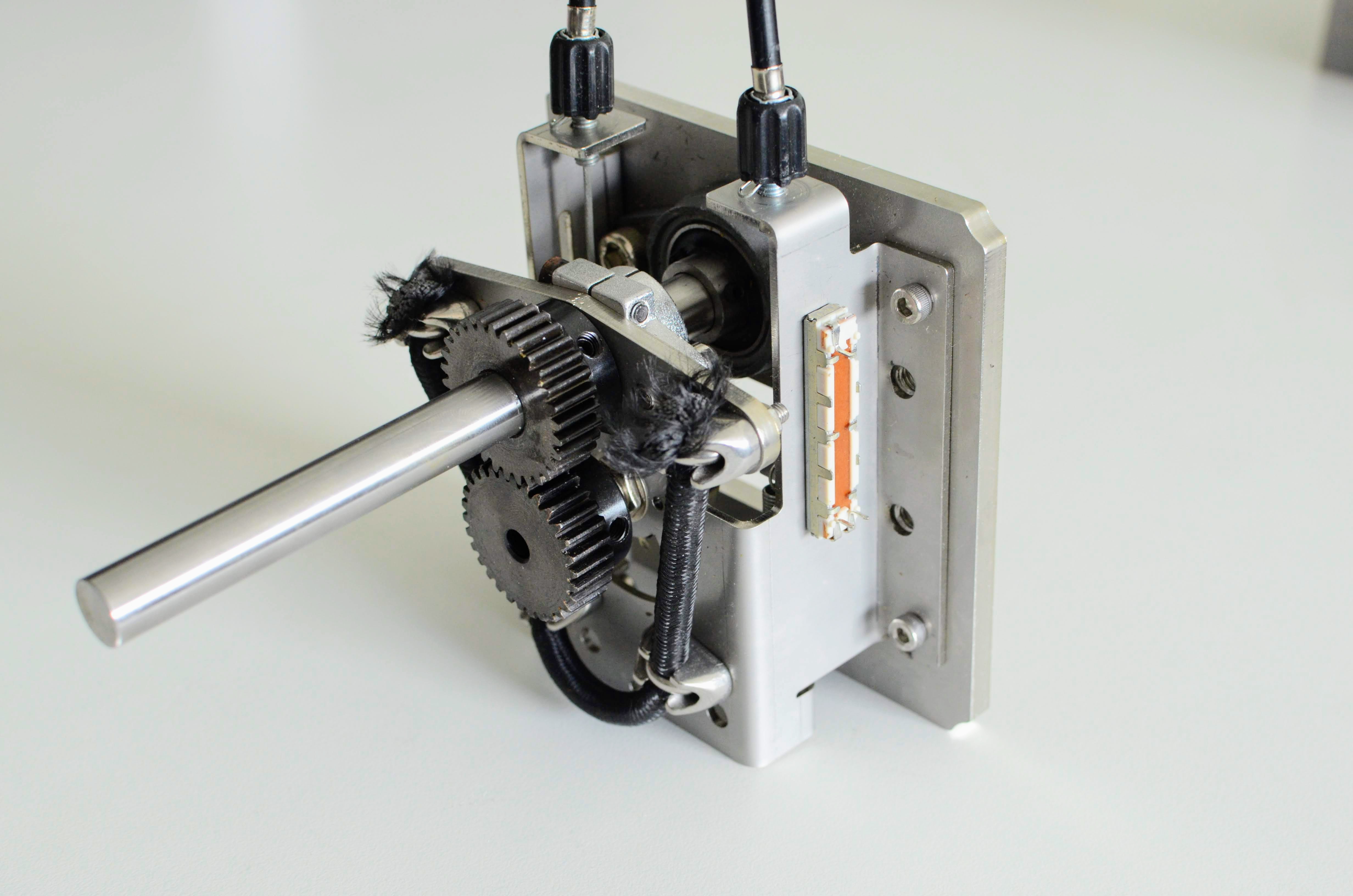 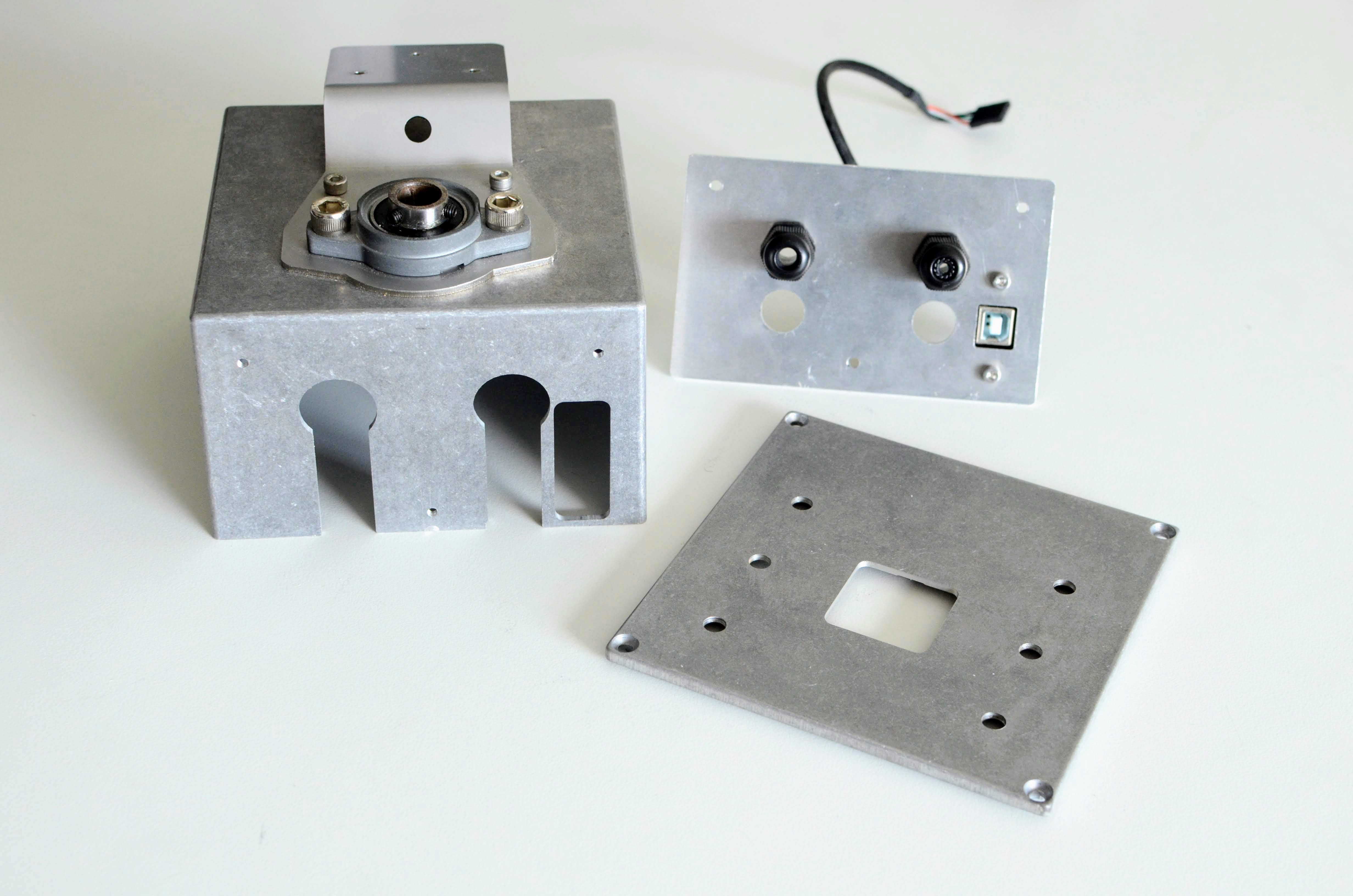 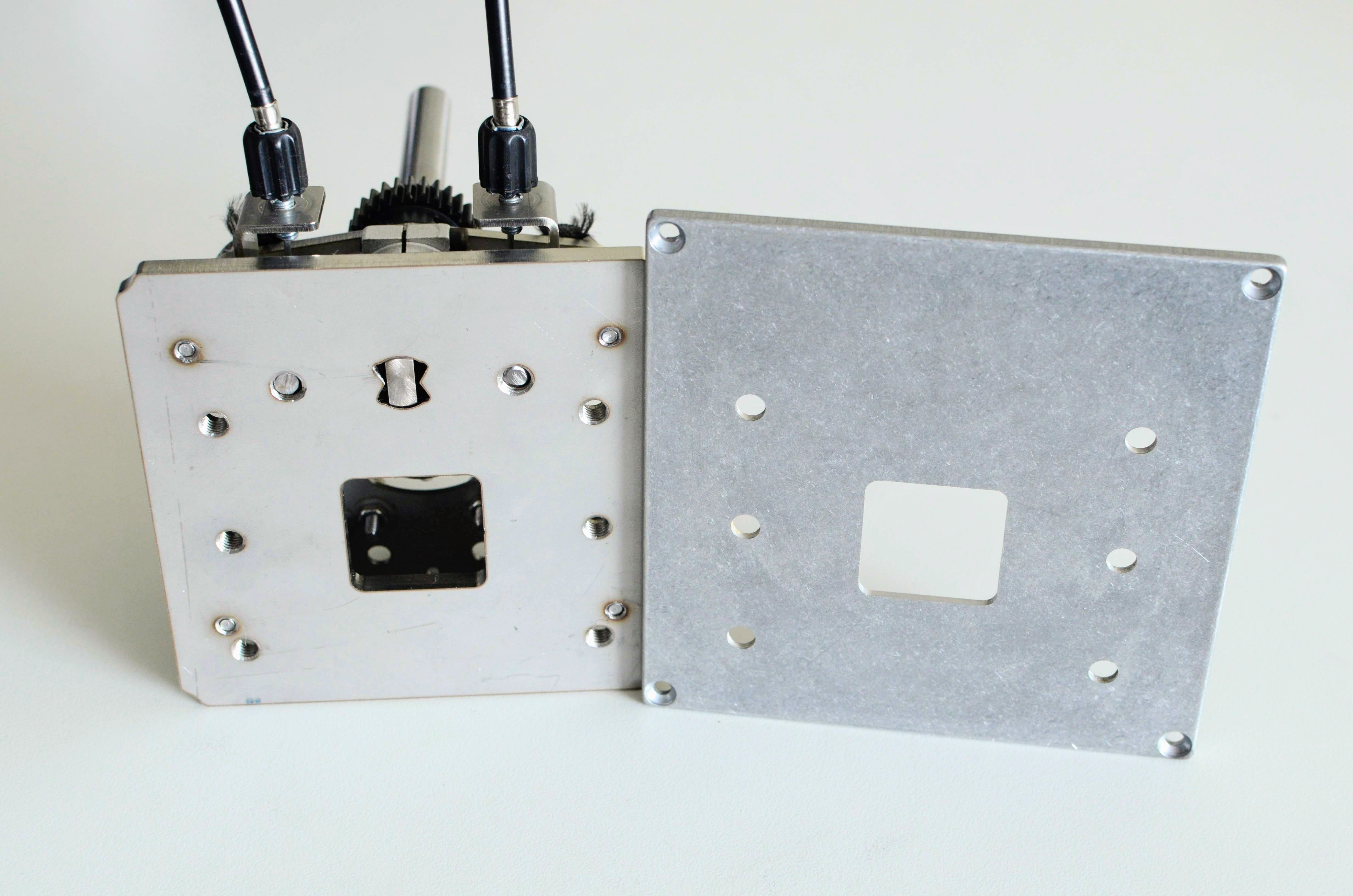 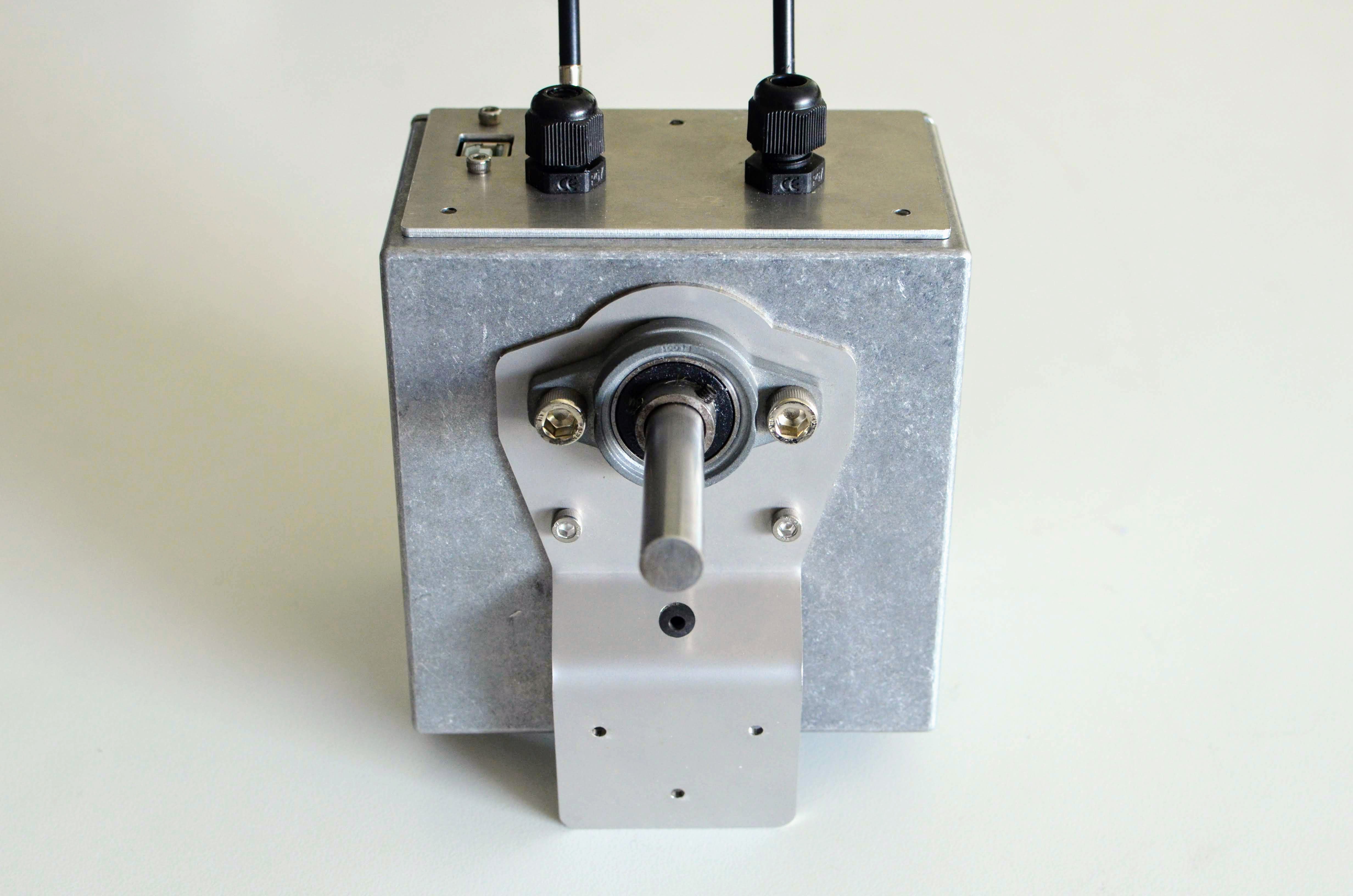